What can you learn from the storytelling techniques used in Jordan Peele’s Nope?

Jordan Peele has quickly established himself as one of the best writer/directors in Hollywood today. Both his scripts for Get Out and Us are amazing examples of great storytelling for any screenwriter at any stage to learn from, but for this post, we’re taking a look at his newest movie, Nope.

Let’s analyze four screenwriting concepts Jordan Peele really nails in Nope so you can use his methods to improve your craft.

Open a Script with a Spectacle

We all know how important the openings of our scripts are. The opening sets the tone of the entire movie and gives the audience the first impression, which, so much of the time, dictates how willing the audience will be to give you their full attention. When an opening sucks, many people will subconsciously check out and immediately become disconnected from the movie. That does not mean they will not end up liking the movie, but it does create a psychological and emotional barrier that the movie will have to break through with even more effort.

As stated in our previous article, one of Nope’s primary themes is the dangers of pursuing spectacle. So, what did Peele open this movie with?

A true spectacle… Both true as in “attention-grabbing” but also true as in something that can happen, that already has happened. Not only that, but it is the worst kind of spectacle – something horrifying that we just cannot seem to look away from.

The Gordy incident is actually based on (or inspired by) the true story of Charla Nash who was mauled by a friend’s chimp, having her face torn off and eaten. I know, this is brutal, but it is important to discuss. Peele very deliberately opened his movie with a spectacle of the worst kind to not only prepare us for what is to come, but to immediately paint a picture of how serious the themes are. This is not just a fun alien movie. This is a movie with depth, weight — a movie that demands our full attention. And Peele told us all of that in the first two minutes of this movie.

Include Tone and Theme in Your Setup

Another really important aspect of a great script is the setup. This is where the tone is set and the themes are stated.

As I said earlier, Peele opened Nope with something attention-grabbing, thematically relevant, and symbolic of what the whole movie is about — spectacle. So, he got us hooked with the first frame. Then he moves on to some really interesting, Kubrick-like shots of the UFO’s mouth and Eadweard Muybridge’s “The Horse in Motion.” Think about the layers there and how that transition sets up the story to come. I could analyze just the opening of this movie with an entire article, but I will leave that up to you to think about.

After taking his time to set the tone with these mysterious shots, we move into the inciting incident — when OJ’s father dies.

What Peele does great in this movie is letting the characters speak for themselves rather than telling us what to think of them. There are no long monologues explaining the relationships between OJ, Emerald, and their father. Simply by showing us how they both react to the death of their father, we get to know so much about who they are. Not only that, but the way they behave with each other also shows us who they are. For me, this is the best kind of writing. Letting the events of the story and the reactions of the characters establish things, rather than using dialogue to tell us. It allows us to project ourselves into the characters much easier.

How to Establish Characters

Establishing your characters and getting the audience to organically connect with them, which is what forces the audience to commit to their journey, is one of the hardest things to get right. Yet again, Peele pulls this off masterfully in Nope by showing us who the characters are rather than telling us how they feel. He throws us directly into the traumatic experiences the characters face, letting us see how they react and behave.

In the first 30 minutes of this movie, Peele lets us hang out with OJ and Emerald, showing us how they are dealing with the death of their father and the state of the ranch. He does not force anything. He does not show them at the funeral crying or show them sitting at a coffee table talking about precious memories. He brings us into the reality of the situation in a much more realistic way that gives us room to connect. By showing us how they are dealing with things and what their priorities are, we actually FEEL their intentions rather than just being told what they are.

OJ wants to save the ranch and his father’s name.

Emerald wants to achieve fame by capturing “the Oprah shot.”

These intentions are what drive them for the rest of the movie, of course, shifting at the end when things go awry.

In fact, every primary character in this movie is dealt with in this way. They do not say how they feel or what they want in every scene. We observe them behave which shows us who they are. Think about it…

Leave Things Up to Your Audience’s Imagination

What I think Peele is especially brilliant at is vagueness — leaving things up to us (the audience) to interpret.

At this point, Peele is known for consciously being vague. He wants the audience to project their imagination onto the screen and into the characters. He wants us to come up with our own interpretations of what certain characters, themes, and symbols mean.

In an interview with The Hollywood Reporter at Loyola Marymount University, Peele said:

“Your audience’s imagination is better than anything you can do… assume the audience is brilliant, because they are.”

Essentially, Nope is a fun thriller — a blockbuster. It is a movie that the average audience member can enjoy simply for the excitement, action, thrills, and scares. It is a movie that does not need to be analyzed. The story works at its surface, closing all the loops of a true cinematic experience.

If you WANT to go deep, you can. Peele sprinkles in all the fun stuff we cinema lovers love to chew on in great films. Every character represents something more meaningful. Symbols show up in every scene. And layers of story are blended together that create an experience that forces us to ask questions, desperately wanting more. But he never does that at the expense of the primary story being told about the characters he creates.

Locations play an important role in screenplays, and Jordan Peele really puts his to work in Nope.

This movie does not have that many locations if you think about it. The house, ranch, and Jupiter’s Claim are where 90% of the movie takes place, but Peele knows how to utilize these locations and bring them to life so as not to bore the audience.

Especially for screenwriters just starting out, sometimes using as few locations as possible is the best way to go. Fewer locations, most of the time, equates to a smaller budget, which means less risk. Also, fewer locations can make it easier for us writers to tell a clearer story — fewer items of focus can equate to less confusion for us and the audience.

At $68 million, Nope definitely did not have a small budget, but it is a great example of how you can still create a HUGE experience for the audience but with little resources on the page.

How to Blend Genre

Jordan Peele is a master of genre-blending. If you want to write a screenplay that takes elements from multiple genres and mixes them together, Peele is certainly one of the best to learn from.

Nope explores many different genres, including sci-fi, western, thriller, horror, and action. Not many films being made these days can weave genres together in a way that does not feel convoluted, but this movie is beautifully balanced, shifting genres only when it absolutely has to as a way to strengthen the storytelling and impact of the themes.

For example, the infamous bloody house scene is as much of a true horror scene as the bloody elevators scene in The Shining. Just before that is a scene that feels more akin to fun thriller scenes from Jaws — the scene where OJ has to rescue Lucky from Jupiter’s Claim. Even with a sharp change in genre, nothing feels forced. In fact, it feels like the most gruesome scene has to happen at exactly that moment to make it clear that things are about to take a turn for the worst.

If you want to up your genre writing game, learn how Jordan Peele writes according to genre.

Remember, there are no hard and fast rules to this magical craft, but there are patterns that you can find in every great script that can help you tell a better story. You can learn so much from Jordan Peele’s work, but the most important lesson that I got after watching Nope is this:

NEVER be afraid to take chances. Learn all the “rules” and patterns, but do it so you can feel deeply confident when you decide to break them for yourself. 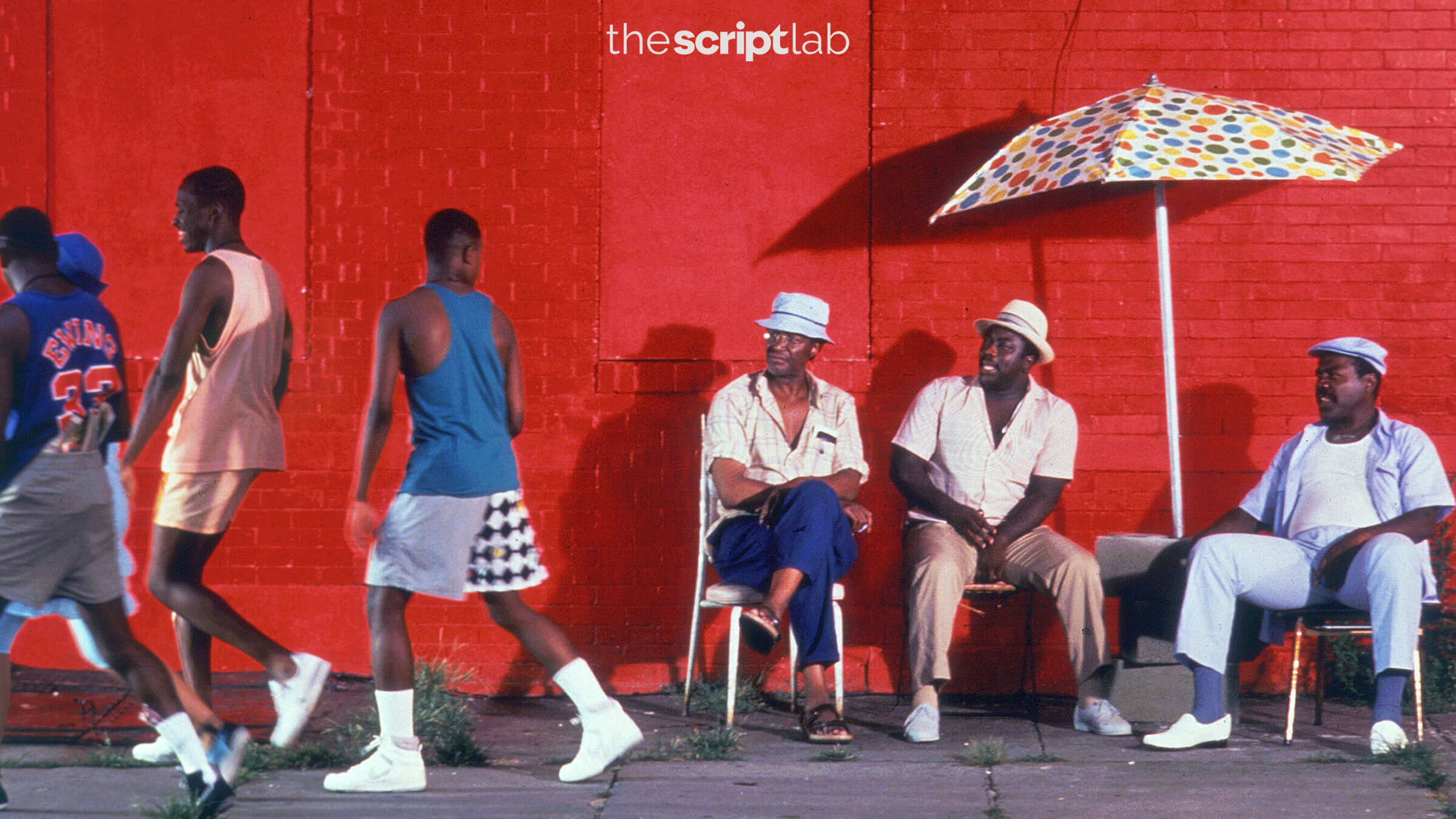