The characters of Federico Fellini‘s 8 1/2 are obsessed with age. Apart from the occasional young person who somehow finds their way into a scene and is simply too naive to know any better, or to care, the chief characters range in age from their late 30s to nearly bedridden and all of them are desperate to regain that which is lost. The men all have mistresses far younger than they, the women make themselves up literally and with feigned indifference. While this is not the point of 8,it is significant to it. This film is about the fear of commitment, both artistic and emotional. Allowing age to run rampant in the way it does here, with barrages of the elderly ambling about in the sunlight (in a place so strongly resembling the afterlife its no wonder nothing gets done) and women whose usefulness runs out around the age of 55, suggests to the audience that time is fleeting, and commitment is an anchor. Freedom to pursue whatever you want comes at the cost of not being tied down. To what? Your producer, your crew, your cast, your friends, your wife, your mistress, your ideas, your ideals, yourself.

Guido Anselmi (Marcello Mastroianni) is a supposedly successful director, though his current project has stalled out almost entirely and his past triumphs are ambiguous. He spends his days at a health spa, surrounded by friends and the elderly, some of whom could be called both. Distant from his wife Luisa (Anouk Aim) and really only sexually intrigued by his younger mistress Carla (Sandra Milo), Guido bounces from one assurance to the next, telling everyone he’ll be with them shortly. He won’t. Guido struggles with his current project, receiving an incessant battery of harsh words from his consulting critic (Jean Rougeul) and sycophantic nudging from his producer (Guido Alberti). Inasmuch as his own vision is blurred beyond recognition, the confused feedback only does him a disservice, and pushes production back…and back…and back. When Luisa comes to visit, her immediate recognition of his infidelity drives a thorough wedge between them, and forces revelation on to Guido.  Though who’s to say if it sticks. His artistic impotence grows like a weed, encompassing his days, and as he simultaneously recognizes his shortcomings as a lover, the film reaches a climax of insecurity. In the end, Guido Anselmi, for the first time in the film, does something.

Much time is spent moving fluidly in and out of Guido’s daydreams and flashbacks. The two become so muddled as to make neither clearly definitive, though it doesn’t really matter. He’s a man looking constantly for escape…and only the mind offers it. In his flashbacks we see the perpetual joy of youth, broken only by his Catholic upbringing, which interestingly also seems to drive his relationships with women, delegating them to second tier. In a particularly apropo daydream we find Guido the master of a harem, filled with all the women he’s ever loved or lusted after. A burlesque dancer from years past is ceremoniously relegated to upstairs, where all tired old women must go. For Guido they no longer fulfill a fantasy, sexual or emotional, so what else could they be good for? Occasionally he is visited by a beautiful young woman, clearly to his mind a perfect sexual specimen and spectral muse. This is yet another opportunity for Guido to be self-reverent, yet when the woman who inspires this imagining arrives in real life, she outlines his shortcomings, reminding him repetitiously that he’s unable to truly love. She is summarily dismissed.

Fellini’s black and white isn’t immediately significant, though when considered further, its aesthetic reveals an affinity for brightness. A trip to a spring to receive a dose of healing waters where Guido is surrounded by the aged is blanketed in sunlight, revealing the wrinkles and crags of all in attendance. He’s either suggesting that none of us can escape age, or that age itself carries some sort of beauty – perhaps both. Then again, as the film comes to a close and all the key players in Guido’s life parade hand-in-hand in a circle, the sun sets. A dusk of ideas.

Guido’s penultimate choice becomes to go on or quit, and for a man who relishes the easy way out, his decision seems obvious. But again, the surreality of daydreams muddle the truth, and his choice is unclear. He seems at first on the verge of escaping, then perhaps comes to a revelation. Seeing as nearly every element of the film we catch a glimpse of might as well have been taken directly from his life, the decision to continue or quit is a vast one, with vast consequences. Going forward with the production of his film means recognizing and acknowledging his severe flaws and attending to them; quitting paradoxically means going forward without reconsideration. But in recognizing his choices, he seems already to have traveled irreparably into knowledge. In trying to construct something from the pieces, you lose the whole. A Director is not a God, and incapable of creating in the same way.

Fellini’s film about a film is near to bursting with imagery and themes, and as confused as the main character is, so does the film’s construction at times. Still, at its core, this is a story about fear and frustration, and themes so universal are hard to avoid. For anyone who’s ever imagined or conceived, there’s a moment of impotence lying within the reels of 8, just for you. The Ghostbusters Franchise: The Best Thing That Ever Happened To Me 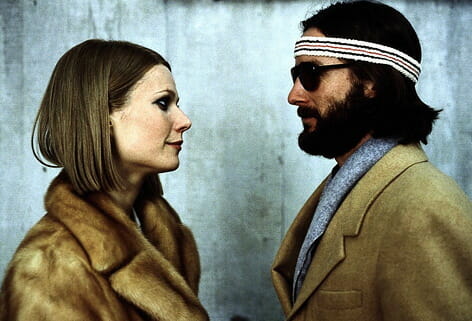 The Royal Tenenbaums: Despite It All, Wes Anderson Is A Writer Bonnie and Clyde: A Transition