Louie CK’s unconventional 30-minute comedy Louie returns after a much-applauded first season on FX.  The veteran comedian’s earlier attempt at a series, HBO’s Lucky Louie, was a true-to-form sitcom that never got past a first season.  His new show is anything but that.  If you’ve not yet seen it, give it a watch, as it is something to be studied if – for nothing else – its valiant attempt at a new format.

Considering Louie CK’s success with the first season and it’s format-shedding style, expectations were high that with his footing securely planted in a second season, he’d deliver a flag-planting premiere to demonstrate that the show plans to stick around.  True to its lack-of-form, the episode demonstrated the voice Mr. CK has been longing to deliver, that of the miserable man who can make sense of it all.  What it does for the senses of viewers who seek more cleverly crafted stories remains to be seen.  It is sort of a “novelty act” of a television show – weird and off-putting, yet quirky and intoxicating.  Sort of like being in a dark box with somebody saying really funny things for 22 minutes.  Sort of like stand-up.  Hmmmm.

The magic of the show is that Louie CK – who writes, directs and edits the show – exposes the slivers of real life that would upset the stomachs of most of the people they would normally affect.  He then demonstrates how a talented comedian draws material from that pain to deliver hard laughs, via clips of his stand-up.  The episode begins with Louie brushing his daughter’s teeth, getting a mouthful of how much more she prefers time spent on her mother’s side of the divided custody divorce.  Later we see him trying to scold and teach a lesson to his daughter about fairness.  She wins.  Later still, we get a stand-up segment taped at the Caroline’s on Broadway Comedy Club in Manhattan.  He jokes about how parents can look at their children and feel a never-ending love for them, then – in the very same moment – despise their very existence.  It’s cold-hearted, brutally honest for some parents probably (Not mine!  Okay, yea, probably mine.) and really funny.

While many attempts have been made to toss familiar television formatting to the wind, Louie seems to have figured out a method he (if nobody else) is comfortable in.  The lack of format leaves the show very susceptible to harsh criticism and lost viewers.  Character arch is present in every episode, but because the insight into Louie’s “character” are delivered through his stand-up – instead of a “talking head,” documentary-style segment (Modern Family) or through cute bedroom chatter (King of Queens) or broken fourth walls (Malcolm in the Middle) – his character perspective lacks clarity.  CK brings this information to the audience in a similar manner to what was attempted (and failed) during the early seasons of Seinfeld.  Again, CK should be praised for utilizing his creative license and working towards innovation, but the question is… at what risk?  Breaking the mold is fun, but if the audience can’t follow a storyline, one has to wonder how long they’ll be your audience.

Interestingly, while the show lacks the archetypal structure of most story-driven faire, it does not lack drama.  In this season premiere, Louie also gets an unexpected visit from his very annoying – and very pregnant – sister.  In the middle of the night, she shrieks in pain, and we see Louie forced into duty.  His next-door neighbors – who he has never met – come to help.  We see him face the only real conflict of the episode, as he must give his trust to the neighbors to watch his children as he gets his ailing sister to the emergency room.  One could ask why the neighbors couldn’t just help the sister get to the hospital and instead let Louie stay home with his children.  Maybe he felt that was too much to ask of new friends.

The funny, yet intense scene ends hilariously when they reveal that the pain was caused by bad gas.  Louie shows heartfelt appreciation to his neighbors and new friends.  Right on cue, we cut to Louie on stage at the famed, basement-located Comedy Cellar Comedy Club in Greenwich Village, New York (the club’s exterior is seen as well, in the opening credits).  Louie proceeds into a segment of his stand-up routine wherein he describes the awkwardness of making friends after the age of 40.  Louie’s stand-up never explores the exact scenario from the previous scenes though, which lets comedy-savvy viewers examine how a real life scenario might be broken down into pieces – then rebuilt into a stand-up routine.

In the end, the show is funny.  Louie CK is a true talent who is not only one-of-a-kind hilarious, but also multi-faceted as the shows heavy-lifter.  However, while the shows following will always have true support from true hardcore comedy fans and benefits from a competitively scarce time slot (Thursdays, 10:30pm), its anti-structure seems all-too fractured to retain the long-term attention of audiences. The show, which is vastly experimental in its nature, has always seemed to be just that for FX – an experiment.  Louie has been lucky so far – I hope it can last. 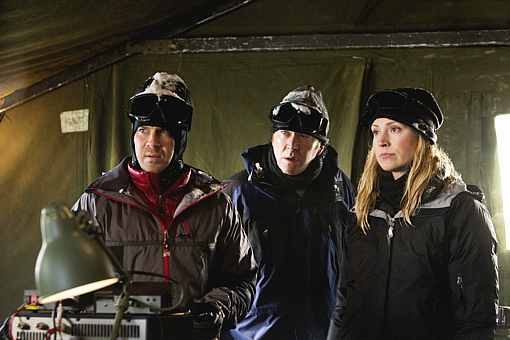