Read: Essence of Storytelling: The Hero’s Journey with Chris Vogler

Here we turn to E.T. the Extra-Terrestrial.

Download the screenplay for E.T. THE EXTRA-TERRESTRIAL here for free.

Elliott is living with his mother, brother, and sister in the suburbs. He’s a child of a recent divorce living a simple life where he struggles to be noticed amongst his big brother and his big brother’s friends.

While he ventures out in the dark to the end of the driveway — picking up the pizza that his brother’s friends have ordered during a Dungeons and Dragons campaign that Elliott so desperately wants to be a part of — Elliott hears strange noises coming from the backyard.

As he goes to investigate, he then hears more noises coming from the shed in the back. Elliott tosses a baseball into the shed and is shocked to see it thrown back to him.

Elliott rushes inside to tell his mother, as well as his big brother and friends, that there’s something out there. Whatever was out there is gone and they dismiss it as coyotes. But Elliott knows that it was something else.

Elliott goes back out on his own and comes face-to-face with E.T., who escapes into the night. E.T. will go on to become Elliott’s mentor, connecting with him and giving him the knowledge he needs within his inner and outer journey.

Elliott’s refusal within the story is subtle but evident.

When he goes back outside the next night to wait and see if E.T. comes back, he’s shocked to see that he has. E.T. is right in front of him.

But instead of welcoming him, his fear gets the best of him. His refusal is present when he attempts to scream out to his mom. He’s so frozen in fear, however, that he can’t muster the words or the necessary volume.

Elliott goes on a mission into the woods above his house where E.T. ran off to. He searches for E.T., putting down Reeses Pieces candies to lure him out. But then he’s scared off when he sees a grown man (known only as Keys in the screenplay) in the woods looking for someone or something as well.

As E.T. moves towards Elliott, he reaches out his long-fingered hand and drops a pile of Reese’s Pieces candies onto Elliott’s blanket.

Elliott is quickly calmed by the gesture. He crosses the threshold in the very next scene when he begins to lure E.T. into his house with small piles of Reese’s Pieces.

Elliott is tested by opening up the lines of communication between him and E.T. He displays his welcoming friendship and does so even further when he introduces E.T. to his big brother and little sister.

As the story progresses, it’s clear that E.T. is getting sick. And Elliott is as well, due to the new connection they have.

During this test sequence, Elliott proves to be a true friend with E.T.’s best interest at heart. He realizes that E.T. is trying to phone home so that his friends can come pick him up from the planet he’s stuck on.

E.T.’s three human friends concoct a plan to get E.T. into the woods so that he can set up the communications device that he’s created to call his ship back.

But things go awry. Elliott falls asleep in the woods with E.T. and wakes up to find him gone. His big brother retrieves E.T., who has collapsed near a river.

With the situation getting worse, they introduce their mother to the ailing alien. She’s horrified to discover that Elliott and E.T. are dying.

At that moment, their house is overrun and quarantined by the government agents, scientists, and doctors.

They mourn the death of their alien friend — the mentor that has taught them about family, life, and what lies beyond their home planet.

As they mourn, Elliott is offered the chance to say one final goodbye to his friend. To his surprise, he sees that the flowers that E.T. is connected to begin to bloom again. He rushes to E.T.’s body to discover that he has somehow been resurrected.

With the government agents, scientists, and doctors all around, Elliott must pretend that E.T. is still alive.

Elliott tells his brother the good news and, off-screen, they make a plan to get E.T. to safety and into the woods so he can meet with his ship.

Elliott’s little sister later walks into the living room where their mother is being comforted by Keys. She asks if the boys are gone yet. It’s revealed that Elliott and his brother told her to give their mom a note after they’ve left.

The boys are about to steal the vehicle that E.T. is being transported in, but they are quickly discovered.

They enlist the help of his brother’s friends as they meet at a park and head out on their bikes.

Elliott is resurrected as a leader. No longer is he looked upon as a tag-along. He is in charge — and his brother’s friends fall in line right away when they see E.T. come out of the van.

The authorities chase them, leading to the iconic moment where E.T. uses his powers to lift them to the safety of the woods.

When they arrive in the woods, E.T.’s ship returns. Elliott’s mother, little sister, and Keys arrive.

E.T. says his goodbyes to his friends, with Elliott being the last.

E.T. reconnects with Elliott via his magical touch, telling Elliott that he’ll always be right with him thanks to their connection.

They watch as E.T. enters his ship and ventures off into the stars. His road back is evident in his safe return to his ship, where the story started for him.

Elliott’s road back is the return to his normal family life as E.T. flies away. A family once broken by divorce is now united through this impossible story of a visitor — and now friend — from the stars. 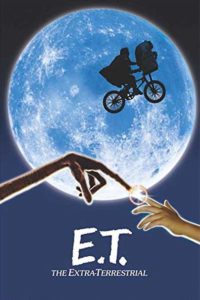