Ranking the Films of the Coen Brothers

Joel and Ethan Coen, otherwise known as the Coen Bros, are a film-making duo who write, produce and direct their films and together have been responsible for some of the most exciting and playful American films of the last thirty odd years.  The films of the Coen Brothers are self aware, eccentric and individual, darkly funny and bear an unmistakable Coen Bros touch. Characters, with exaggerated eccentricities are one of the keys to their style and  even their supporting characters are vividly realised. Their movies frequently reference film history (the title of O Brother, Where Are Thou? is a nod to the contentious film script in Preston Sturges’ 1941 classic Sullivan’s Travels) and play with generic conventions – from film noir to screwball comedy.

So, in celebration of their latest release, Hail, Caesar we are ranking the Coen library from Blood Simple to Inside Llewyn Davis. All Coen movies have their charms, and some are more popular to hate on then others (and vice versa). A ranking like this is subjective in its very nature, but at the end of the day, all of their film's are worth watching.

Note: The following list excludes the two portmanteau films Paris, je t’aime (2006) and To Each His Own Cinema (2007) that the Coen’s contributed to instead focusing on movies that are unmistakably Coen-ish.

A remake of the 1955 Ealing comedy of the same name, relocated from England to the American south, where a gang of crooks outwitted by a little old lady. The Ladykillers is a surprisingly charmless comedy that is filled with shrill characters and unfunny situations, the charm of the original lay in its simplicity, but here that is replaced with too much detail, too many subplots and completely obnoxious characters (including the old lady). This is an anomaly in the Coen’s oeuvre, a movie that just doesn’t work.

Set in the burgeoning folk scene of 1960s Greenwich Village, it follows an aspiring folk singer who finds himself with a cat and nowhere to live, his musical partner has committed suicide, his album isn’t selling and he has gotten someone else’s girlfriend pregnant. Hailed as a masterpiece by some, Inside Llewyn Davis is meticulously detailed with some nice surreal touches and an excellent soundtrack, but it suffers from the fact that none of its characters are at all likeable – although the performance by Coen regular John Goodman as a junky jazz man is a delight.

Capra-esque comedy set in 1950’s corporate America where the corrupt board of Hudsucker Industries appoint an idealist from the mail room to run the company, unaware that he is the front for a scam. Cartoonish and eccentric with Coen-ish twists on all the classic Capra characters – the innocent idealist (Tim Robbins), the tough female reporter (Jennifer Jason Leigh) and the evil capitalists (led by a crocodile smiling Paul Newman).

Set in 1960s suburbia, a Jewish physics lecturer finds his life snowballing out of control, one bad situation leads to another until he begins to question his sanity and his faith. Meanwhile his rabbi dishes out cryptic advice. This genuinely odd little movie is extremely understated and very quirky. It has very specific Jewish themes and issues which are at times a little bewildering to a non-Jewish audience, but at its heart is the story of a man tested by life or God or some other external force.

A dark and claustrophobic tale of an insecure intellectual playwright (the wonderfully neurotic John Turturro) who goes to Hollywood to write a screenplay only to develop a severe case of writer's block, his sanity crumbles while sinister undercurrents swirl around the seedy hotel he is holed up in, where the wallpaper in his room literally curls. Vivid, grotesque characters and a moody atmosphere make this a dark treasure.

The Coen’s go west in this remake/reinterpretation of the 1969 John Wayne western, with Jeff Bridges making the crusty one-eyed Rooster Cogburn very much his own. True Grit is a that rare beast a clever re-visioning of an iconic original, gritty and gleefully self aware it plays with the classic conventions and the characterisations of the genre.

A childless odd couple – an  ex-cop (Holly Hunter) and an ex-con (Nicolas Cage), who is struggling to go straight, kidnap one of a furniture tycoon’s quintupletes. They try to set up house while the irate father hires assistance to recover his child. On paper the plot shouldn’t work, but somehow the manic energy of this madcap slapstick comedy with its outrageously cartoonish characters carries it through.

A pair of not overly bright gym employees discover a disk containing CIA secrets and after a failed blackmail attempt try to sell it to the Russians. The plot loops playfully around itself, but it is the characters, self-obsessed and neurotic to a fault, and perfectly cast (Frances McDormand's self improvment fixated schemer, Brad Pitt's vacuous gym bunny,  John Malkovich's boring CIA analyst, and George Clooney's Treasury agent with a sex aide fetish) that make the movie.

A successful divorce attorney and a gold-digger go head to head, after he foils her plans for a massive divorce settlement. An arch and clever re-creation of the screwball/battle of the sexes comedies of the 1930s and 40s with George Clooney and Catherine Zeta-Jones perfect cast as the warring leads. Intolerable Cruelty is one of the few movies that even goes close to re-capturing the wit and flair of the genre.

Prohibition era gangster saga where an Irish mobster’s chief advisor finds himself caught in the middle of a gang war, and decides to play both sides against the middle. Miller’s Crossing is highly stylised and violent, with colourful cartoonish characters (Albert Finney is memorably over the top as the mobster, his performance contrasting with Gabriel Byrne's more understated style). The period detail is beautifully realised and there is a wry awareness of the conventions of the gangster genre.

A manic, cartoonish ride, crammed with eccentric details, and singing, and is more than slightly reminiscent of the unique style of the great Preston Sturges (check the title reference). Three convicts escape (led by one Ulysses) and trail across 1930s Mississippi in search of buried treasure, only their journey begins to look more and more like that of Ulysses in The Odyssey as they encounter sirens, cyclops, gangsters and the KKK.

Laconic, somber retro noir, filmed in elegant black and white, captures the look and feel of classic noir and the novels of James M. Cain. Billy Bob Thornton's chain smoking barber whose reaction to every situation seems to be to sit and smoke and ponder why no one notices him, tries to blackmail his cheating boss, but his plans (in classic noir style) go terribly wrong. The clouds of cigarette smoke that waft across the screen are a typically playful Coen brothers touch, referencing the traditional chain smoking detective in classic film noir.

The Coen’s debut is a piece of pure neo-noir, lean, mean and darkly funny. A jealous wealthy man hires a detective to kill his wife and her lover, but things get complicated very quickly. At first glance the plot is minimalist, but it becomes increasingly complex revealing twist on twist and the four central characters, the husband, his wife, her lover and the detective find themselves ensnared in spider's web of deceit and murder. Spare and dark, both physically and subjectively Blood Simple displays a wide depth of knowledge of genre history.

An easy going slacker is mistaken for a millionaire and has his life turned upside down, but remains serene in the face of trial and tribulation.  The movie is anchored by Jeff Bridges' performance as the title chracter otherwise known as 'The Dude', but he is surrounded by a cast of memorable supporting characters. Bowling, pornographers, nihilists and Russians combine in a narrative that is pure Coen Bros,  convoluted, and manic, ultimately it is an oddly but profoundly satisfying tangle of quirky characters, comedy and crime.

Fargo is one of those rare movies that can be called an instant classic, with its bleak white landscape and slow spoken characters. Mrs Coen, Frances McDormand is perfectly cast as a heavily pregnant policewoman whose quiet life is disrupted by an alarming series of increasingly brutal murders, and the supporting characters like William H. Macy's desperate salesman and the two killers he hires played by Steve Buscemi and Peter Stormare, are unforgettable. Droll, blackly comic with extremely dark undercurrents, a perverse plot  that borders on horror, all of the characters seem larger than life and around them everything is quiet and stark snowy white, stillness of the backdrop almost magnifying the twisted convolutions of the narrative.

Based on the novel of the same name by Cormac McCarthy, No Country For Old Men is an elegant and powerful study of human weakness, part western, part thriller, part meditation on human frailty, punctuated by bursts of black comedy and violence. A hunter stumbles on a drug deal gone wrong and decides to keep the drug money for himself. Meanwhile the local sheriff bewildered by the horrors of the modern world and a ruthless assassin.  The killer Anton Chigurh as played by Javier Bardem emerges as one of the most sinister and memorable screen villains of recent times, and is nicely balanced by Tommy Lee Jones' weary but honourable sheriff and Josh Brolin's increasingly desperate hunter.  It neatly combines the gravity of the source novel with the Coen’s unique style and narrowly edges out Fargo as their best film so far. 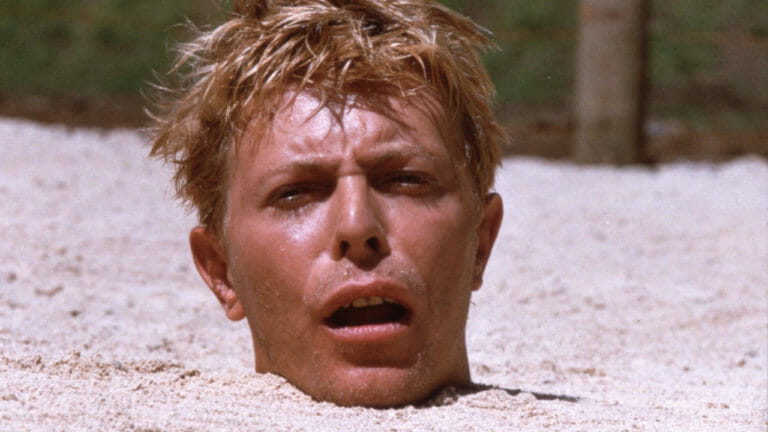