This series depicts how the son of an aristocratic family seeks redemption and recovery. Patrick learns of his father's passing and must travel to New York to collect his remains, whilst struggling with drug withdrawals. At the Melrose family's house in the South of France, young Patrick has the run of the magical grounds; while the family awaits the arrival of weekend guests, shocking events transpire that tear Patrick's world in two. Patrick reluctantly agrees to go to his first big social event since recovering. Together with his good friend Johnny Hall, he attends a glittering party in the English countryside hosted by former hippie Bridget - now married, titled and miserable - and attended by Princess Margaret as well as a number of Patrick's old flames. Amid a crowd of social dragonflies, Patrick searches for redemption and capacity for forgiveness, while confronting his past in a myriad of ways. Patrick reverts back to his old destructive behavior. Patrick struggles with his childhood resentments as he attends his mother's funeral. In flashbacks, he attends to his alcoholism in a rehab facility. 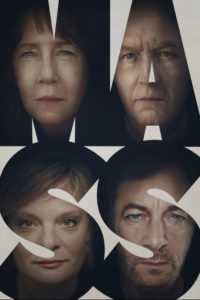