Retired heavyweight champion Rocky Balboa (Sylvester Stallone) runs a small restaurant in Philadelphia. He mourns the death of his wife, Adrian (Talia Shire), a victim of “woman cancer”, while maintaining an awkward relationship with his grown son Robert (Milo Ventimiglia) who is trying to step out from his father’s long shadow.

One day, Rocky sees a computer-simulated fight on television, showing his younger self defeating the current champion, Mason “The Line” Dixon (Antonio Tarver). A fire begins to burn inside of him. Decades removed from his glory days, Rocky nevertheless decides he wants to put the boxing gloves on one more time. (00:38:47)

After making his case to the state boxing commission, Rocky is given a license to box as a professional, much to the chagrin of Robert who feels mounting pressure as the son of a famous athlete. (00:46:16)

Robert joins his father at Adrian’s grave. He informs Rocky that he quit his job and he would rather be with Rocky as he prepares for his upcoming bout with Mason Dixon. Rocky has his team, Paulie (Burt Young), Adrian’s curmudgeonly brother, Duke (Tony Burton), Rocky’s old trainer, and Marie, an old friend of the neighborhood, now a single mother, with whom Rocky has rekindled a friendship after many years apart. (01:06:21)

Rocky has a warm chat with Marie outside his Las Vegas hotel room. Marie thanks him for helping with her son. Rocky’s group of supporters have come full circle, each coming to terms with Rocky’s decision.

First, his son Robert has come to terms with his place in the world, showing maturity by throwing his unconditional support behind his father’s choice to step in the ring again. Second, Duke, who helped Rocky regain his heavyweight championship belt many years ago, has once again prepared Rocky to face another formidable opponent. Third, Paulie, once Rocky’s trusted sidekick and now a grumpy old man living a sad life, has found a glimmer of shared hope in Rocky’s newfound ambition.

And now Marie, once a spunky young girl on the streets of Philadelphia with the world at her feet, is now a middle-aged woman mired in poverty who has become a surrogate female presence in Rocky’s life. (01:13:19)

Rocky knocks Mason Dixon down, proving to the world with one jab that the last thing to age on a boxer is his heart. The crowd goes wild as Dixon realizes he has underestimated the fearless former champion. (01:25:28) 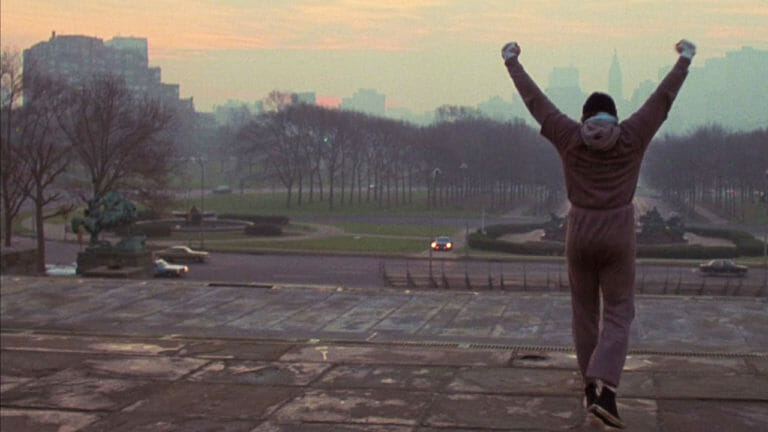