Time to stock up on munchies, slip on your most comfortable slippers, and lift off into a cloud with some dope stoner comedies.

Whether you indulge recreationally, medicinally, or not at all, the pungent aroma of weed is only going to become more mainstream as legislators look to end Federal prohibition here in America. The stigma of becoming the stereotypical deadbeat stoner has been lifted and ganja is no longer a youthful rebellion against the establishment, but just another everyday aspect of life for many of us.

No matter your stance on the plant, progress is worth celebrating, and there’s no better way to honor the inevitable emancipation of Mary Jane than to read a script that’ll make you giggle like it’s your first inhale. Stoner comedies deliver memorable and quotable lines at a breakneck pace while keeping readers on their toes with unexpected cameos and narrative turns.

I promise I won’t bogart these scripts from you any longer, my friends.

Allow me to pass some of the dankest scripts for 4/20 to the left hand side — just don’t mess up the rotation!

After the success of his second feature Slacker at the 1991 Sundance Film Festival, writer and director Richard Linklater kept getting asked the same question over and over again while on the press junket, “What do you want to do next?”

His next film would be his first studio effort, and he wanted to tap into the excitement of his youth. His original idea for Dazed and Confused was much more experimental than the film we know and love today.

As he wrote for The Guardian:

“I wanted to do a realistic teen movie – most of them had too much drama and plot but teenage life is more like you’re looking for the party, looking for something cool, the endless pursuit of something you never find, and even if you do, you never quite appreciate it.

“An experimental version of the film had been floating around in my head between 1989 and 91 – just four guys driving around in a car busting mailboxes to ZZ Top.”

The feature would take place in two shots over the course of an album, but Linklater eventually wanted to tell a broader story from more perspectives. In order to tap into each character’s personality, Linklater made a mixtape for each (what you kids today call playlists) — one character would like Joni Mitchell while another character dug Black Sabbath.

Legendary music producer and filmmaker DJ Pooh and Ice Cube would naturally joke and toke in the music studio when one day they started talking about a movie. Most movies about the Black community at the time focused primarily on violence and desperation.

Ice Cube told Complex that he didn’t see it that way:

“Everybody was looking at our neighborhood like it was hell on Earth, like the worst place you can grow up in America. And I’m like, Why? I didn’t see it at all that way. I mean, I knew it was crazy around where I grew up but we had fun in the hood. We used to trip off the neighborhood.”

They decided to structure the movie around a single Friday in their neighborhood and built the story around that, using characters and situations based on real childhood neighbors. It was the third script that Ice Cube wrote, and he felt his prior two were underdeveloped:

“Being self-taught, sometimes it takes a couple of tries to figure out what you need to do. By the time I wrote Friday, I was coming around, getting the whole structure of a script together.”

Ice Cube approached director F. Gary Gray to direct the feature. The two had worked together on multiple music videos such as It Was a Good Day. Ice Cube wrote the script for Friday while on tour in Europe. He would do a show one night and be up with DJ Pooh on the phone working on the script the next morning.

They intended to produce the film themselves knowing that Hollywood wouldn’t be ready for it but decided to approach New Line Cinema because they understood the black movie market with hits like House Party. The heat of Friday would burn up the box office and sprout two sequels.

While childhood friends and writing partners Seth Rogen and Evan Goldberg were writing Pineapple Express, they thought that if one day they walked into a weed store and found a strain called Pineapple Express, they’d have made it as filmmakers. Well, pack another bowl to celebrate Mr. Rogen’s passion for horticulture, because this incredible feat came true and the sativa leaning hybrid is delicious.

Judd Apatow thought it’d be funny to make a movie that follows a character like the one played by Brad Pitt in True Romance getting chased by bad guys — and it is very funny indeed. The opening scene cracks me up.

Sometimes we meet characters in life who deserve their own marquee. Joel and Ethan Coen found inspiration for the iconic character known only as The Dude in a couple of people they spent time with throughout the years.

They met film producer and political activist Jeff Dowd while seeking distribution for their first feature, Blood Simple. His preference for White Russians, his grungy style, and laid back attitude contributed a lot to the character. They also found inspiration from the stories of veteran and script consultant Peter Exline, whose tales from his days as a private investigator with friend Lewis Abernathy, would help inspire key moments in the film like the stolen car, and how the perp left his homework in the back seat.

The Coen brothers structured their script like a Raymond Chandler detective fiction, one where the lead character just wants to be left alone to smoke his weed, drink his White Russians, and bowl in peace but unwittingly and unwillingly is thrust into a criminal kidnapping plot that ultimately kills his friend.

Screenwriters Jon Hurwitz and Hayden Schlossberg knew each other in high school and went to separate colleges, but still found time to write together about halfway through. Their first screenplay, Filthy, sold just before graduating. Without having any connections in Hollywood, they looked at similar raunchy comedies and found an assistant director who worked on several of them. They figured he’d be low enough on the latter they’d be able to approach him.

He loved their script and passed it along to his producer friends. Producer Matt Berenson liked it enough to share it with some agents and managers, who they signed with. They were able to move to LA and give the ultimate dream a shot. They were hired for rewrites and sold pilots, but nothing was ultimately made. That’s when they went for broke to write the funniest script possible, based on their desire for White Castle in a state with no White Castles.

They wrote Neil Patrick Harris in as a character without his consent, but he liked the script and agreed to be a part of the film. With the main theme being Harold and Kumar’s insatiable munchies, the use of a lesser-known food chain as the MacGuffin of the film was a smart choice as it helped promote the film.

Sean Penn’s slow thinking, bumbling portrayal of Jeff Spicoli would become the stereotypical depiction of a stoner for years to come. Cameron Crowe is known to base his work on his own life experience, having lived a full life by the time he reached his twenties, being that he was the youngest contributor to Rolling Stone and toured with The Allman Brothers at the age of 16 (which would later inspire Almost Famous).

If there’s ever been a method writer, Crowe went there for Fast Times. At the age of 22, he infiltrated a high school in San Diego, California to do research for his 1981 book Fast Times at Ridgemont High: A True Story. He wrote about his observations on interactions with his fellow high schoolers. Now that’s dedication.

When it comes to method writing, perhaps there’s no better example than gonzo journalist Hunter S. Thompson. His 1971 novel Fear and Loathing in Las Vegas: A Savage Journey to the Heart of the American Dream, was a feverish glimpse into the shift in paradigms as Thompson began to see the downfall in the idealizations of the countercultural movements of the 1960s.

A film adaptation was first announced in 1976 with Larry McMurtry set to write the script. Both Martin Scorsese and Oliver Stone tried to get the film off the ground but moved on to other projects. In 1992, Rhino Films began developing the adaptation with Alex Cox and Todd Davies working on the first draft. Hunter S. Thompson disapproved of the script and producer Laila Nabulsi turned over writing duties to director Terry Gilliam on a ten-day deadline.

Perhaps this sort of pressure was perfect for creating the same fervent energy of Thompson’s writing. Screenwriter Tony Grisoni joined Gilliam and they wrote the script at the director’s home in May of 1997. Due to WGA rules, Cox and Davies maintained writing credits. Considering that there were several attempts to adapt the book, it was still based on the same source material so it was hard to discern who wrote what.

In the book Cardboard Castles and Chaos by David Gale, Grisoni remembered the process of writing with Gilliam:

“I’d sit at the keyboard, and we’d talk and talk and I’d keep typing.”

Fear and Loathing in Las Vegas is best read sober, but you’ll start to feel like you ate an edible.

Pretty much every film in Kevin Smith’s View Askewniverse deserves to be on this list, but Clerks is one of those rags-to-riches stories we love to indulge in.

Kevin Smith was determined to make his 157-page feature, so, in 1993, he sold his comic book collection (can you imagine what was in there?), maxed out a bunch of credit cards with the highest limits he could get, dipped into his college savings, and used money he got from a flood insurance claim. To limit costs, he shot in black and white and could spare much more for editing.

The fearless leader and his crew shot for 21 days straight at the deli he worked at. They could only shoot at night when the store was closed and Smith barely slept. It was worth it. He believed in his vision and made it happen. Watch this one with some good indica.

Spring Breakers is like having an ice cream sundae to quench your munchies. It tastes good while you’re eating it but you might feel a little guilty afterward. We all need these kinds of guilty pleasures, and this is a great one to watch right after you clear a bong. You might even think it comes with a laugh track. The script is over the top, ridiculous, self-aware, and funny as hell.

Stoner comedies are often journeys into the unknown. Friends in the prime of their youth journey out into the world trying to figure things out. The characters often have to clean up their messes and take responsibility. Isn’t that life?

The best stoner comedies don’t laugh at the drug, but at the world through the lens of the drug. Because when all is said and done, this world is ridiculous, and sometimes the best thing you can do is smoke a blunt and laugh about it. 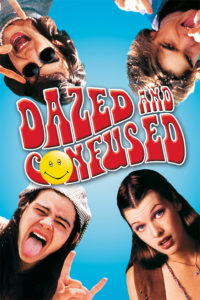