Here we turn to the 80’s classic The Last Starfighter.

We’re introduced to Alex Rogan, a teenager living in a trailer park with his mother and little brother. He’s much loved within the trailer park community and has a wonderful girlfriend that loves him. However, he yearns to escape trailer park life — hoping to go to college.

The only entertainment within the trailer park is an arcade game called Starfighter. Alex happens to be a master at the game. After making up with his girlfriend after a fight, Alex begins to play the game. Before he knows it, he’s close to getting the coveted highest score. Word spreads fast as the whole community watches him break the record.

On what is likely the best night of his life, Alex’s college dreams are shattered when his mom gives him a rejection notice to a university that would have taken him far away from his go-nowhere existence.

He rushes outside, upset.

When he notices that the Starfighter game is acting strangely on its own, he’s confronted by a futuristic-looking car that pulls up in front of him. It is here that he meets Centauri, who invites him in. Alex agrees to go with Centauri as a doppelganger android named Beta is used to cover Alex’s absence.

Alex struggles to get out of the car as it races down the highway until it crashes through a barrier, sending it over a cliff. Thankfully, the car is actually a spacecraft as well. Centauri and Alex travel to Rylos.

Alex then learns that the story of the Starfighter game is real, representing the real-life conflict between the Rylan Star League and the Ko-Dan Empire. The game was designed as a test to recruit new Starfighters.

Xur, a native Rylan traitor to whom the Ko-Dan Emperor has promised control of Rylos, reveals that he has discovered an infiltrator in his ranks and broadcasts the spy’s execution to the Star League as Alex, and his fellow alien Starfighters, watch in horror.

Xur then proclaims that once Rylos’ moon is in eclipse, the Ko-Dan Armada will begin their invasion.

Alex quickly sees that he is in over his head. He asks to be taken home. Once they arrive on Earth, Centauri gives Alex a communicator in case he changes his mind.

Alex actually comes across two mentors in his journey.

The first is a mystical sort of mentor in the form of Centauri. Centauri introduces Alex to the world of Rylos and the conflict between the Star League and the Ko-Dan Empire.

The second mentor is Grig, the veteran Starfighter that will go on to train Alex. Alex meets Grig during his Refusal of the Call.

Alex crosses the threshold the moment he is taken to Rylos for the first time. But he has yet to fully commit to the adventure and leave his Ordinary World. In fact, he returns back to his Ordinary World, hoping everything will be the same again.

He doesn’t fully cross the threshold until after he goes through the Tests, Allies, and Enemies stage.

Alex tells Beta that he’s going to call Centauri to take Beta back so that Alex can go on with his normal life.

Alex and Beta are suddenly confronted by an alien assassin. Centauri arrives just in time to save them — but he takes a hit from the alien assassin’s weapon. He then explains that more alien assassins will be coming and the only way for Alex to protect his family (and Earth) is to embrace his destiny as a Starfighter.

Alex is now fully committed to his fate as the Last Starfighter that can save Rylos and defeat the Ko-Dan Empire.

He understands the rules of the Special World he’s now in. He has met his allies in Centauri, Grig, and Beta. He’s met his enemies in the alien assassins, Xur, and the Ko-Dan Armada.

Centauri and Alex travel back to Rylos, but something is wrong. They arrive at a semi-destroyed Starfighter base.

Alex sees that Centauri is hurt as their vehicle loses control. He struggles to take the helm and saves them from a crash just in time.

A saboteur has eliminated the Starfighter base defenses, causing heavy damage, killing the Starfighters, and destroying the Gunstars. Only Grig and an advanced prototype Gunstar survive.

Alex and Grig are the only ones that can take on the Armada.

As Grig trains Alex, Beta is finding it difficult to maintain his impersonation of Alex back on Earth — particularly with Maggie.

Beta discovers that a group of alien assassins has set up a communication center from their spaceship outside the trailer park.  Beta finally reveals the truth to Maggie. She doesn’t believe him until another alien assassin discovers the pair and shoots Beta. The shot exposes his damaged circuitry and Maggie realizes that what Beta told him was true.

Beta realizes that if the alien assassins report back to Xur and the Ko-Dan Armada that another Starfighter is alive, the universe — and Alex — will be in jeopardy.

They steal a friend’s pickup truck and drive it at full speed towards the alien assassin ship. Beta has Maggie jump out before sacrificing himself by crashing into the ship, destroying it.

Meanwhile, in space, Grig continues to train Alex. It’s revealed that they are up against unwinnable odds by taking on the Armada with one sole Gunstar. Their main objective is to take out a communications turret on the command ship that sends out the command to the deck fighters, allowing the enemy ships to act as one.

Alex points out that in order to get to the command ship to knock out the communications turret, they have to go through the fighters first — impossible. Grig states that he’ll have it all figured out by the time they reach the Frontier. At that moment an alert within the Gunstar goes off — they’re at the frontier. They quickly come across an enemy ship that engages them. This is Alex’s first live target.

While Alex does prevail, his reaction to being put into that situation convinces Grig that maybe Alex isn’t cut out for this mission after all. He agrees to take Alex back to Earth.

While traveling out of an asteroid cave system, Alex and Grig talk about their families that are back on their planets. When Alex remembers playing hide and seek as a child, something occurs to him. He realizes that if they were to hide within a cave, they could let the Ko-Dan Armada pass over them and then attack the command ship and its communications turret first.

Grig likes Alex’s plan but tells Alex that it’s a shame that there are no Starfighters to lead it.

They are about to head out of the asteroid cave and back to Earth when they realize that they’ve stumbled upon an enemy base with multiple ships combing the area.

Alex and Grig take action as Alex destroys the enemy ships with skill.

After the battle, Grig plots a course back to Earth.

However, Alex has a change of heart. Realizing that he’s a capable Starfighter, he tells Grig, “Maybe there is a Starfighter left.”

Alex and Grig attack the Ko-Dan command ship and cripple its communications with the attack ships.

Alex suggests that they activate a secret weapon on the Gunstar — the Death Blossom — to take out the Armada. As they attack the enemy ships to get into close enough range, they wait until the last minute and unleash the Death Blossom, destroying the remaining Ko-Dan fighters.

But the Gunstar floats in space, drained of power, as the command ship sets course to ram them.

Alex and Grig restore power to the Gunstar and attack the command ship one final time, causing it to crash into the Rylos moon.

Alex is proclaimed the savior of Rylos and invited to help rebuild the Starfighter Legion. The Frontier has collapsed and Xur has escaped.

Centauri reveals himself to be alive and well. He was just in a healing stasis. Alex does agree to stay, but he first returns to Earth, his Ordinary World.

He lands his Gunstar in the trailer park as Alex’s family and friends — including his girlfriend Maggie — rush up to greet what they believe to be a UFO of some sort. Grig reveals himself and tells Alex’s mother and the people of the trailer park of Alex’s heroism.

Alex then asks Maggie to come with him back to Rylos. She agrees. Inspired to join Alex, Louis begins playing the Starfighter game.

Alex leaves his little brother behind to take the helm of the Starfighter arcade game in hopes of becoming a Starfighter himself.

Want more on The Hero’s Journey? Check out our breakdowns of Rocky, Ghostbusters, and many, many more! How to Write a Screenplay 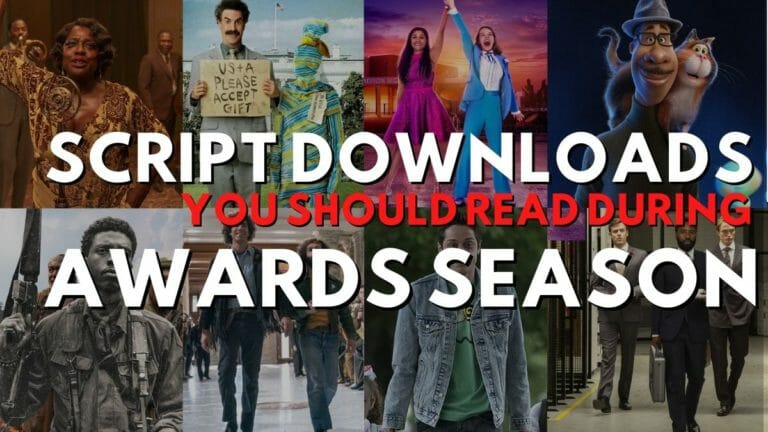 Script Downloads You Should Read During Awards Season